Looking back at a PhD

Looking back at a PhD

The year 2021 just started. 2020 has been a challenging year for everyone, but for me personally there also are two important highlights to look back at: on January 23 I successfully defended my PhD thesis, after which I left Delft for the second highlight: to take the next step in my career. Now I´m gone for some time, I want to take the opportunity to look back at the time I spent at QuTech and share my experiences as a PhD-candidate with you.

To start, I would like to go back quite some years: already during my studies at the University of Twente teachers told me that doing a PhD would fit me. However, I was actually not convinced yet myself that I had the right interest, motivation and attitude. It was only during the summer of 2014, while working on my master thesis, that I realised I like academia and I like doing research. I decided that I wanted to start a PhD project. But then comes the next question: where and what project? I have looked around at different universities and research groups, doubted for quite some time, but in the end, I made the choice for Lieven Vandersypen’s group in Delft, just based on my gut feelings. Looking back, it was the right decision in several aspects, and it is a choice I have never regretted, but that is not to say it was always easy.

I started my PhD on May 1st, 2015, an interesting time, because it was exactly during the transformation from QT to QuTech. This was a transition from a research group of experimental physicists, in which everyone knew almost everyone, to a multidisciplinary, mission-driven institute with not only a different kind of physicists (theoretical physicists), but even different species such as electrical engineers and computer scientists. By now, QuTech consists of over 250 people, which makes it hard to know everyone. Such an environment makes for a different atmosphere, less fundamental research and more (but certainly not only) aimed towards an application, and I think the PIs within QuTech did a pretty decent job in finding a good balance between these two goals. This balancing comes with challenges, but I definitely think starting QuTech was a timely decision and strongly promoted the collaboration between the different disciplines necessary to put everything together for a (prototype) quantum computer and internet. Personally, I like doing research, but having an application in mind motivates me while doing so.

With the growing number of people within QuTech, social activities became even more important to retain the QuTech family feeling. You will always know some people better than others, but for example through participation in the yearly sports days organised by the student association, the QuTech uitje (see blogpost Arian) and the yearly Christmas party, the social cohesion in QuTech is good and there is a nice atmosphere. My personal highlights in that respect are the organization of the QuTech Batavierenrace 2016 team together with Suzanne, and the organization of the QuTech uitje 2016 with Jasper, Michiel, Lisanne, Ramiro and Dan. 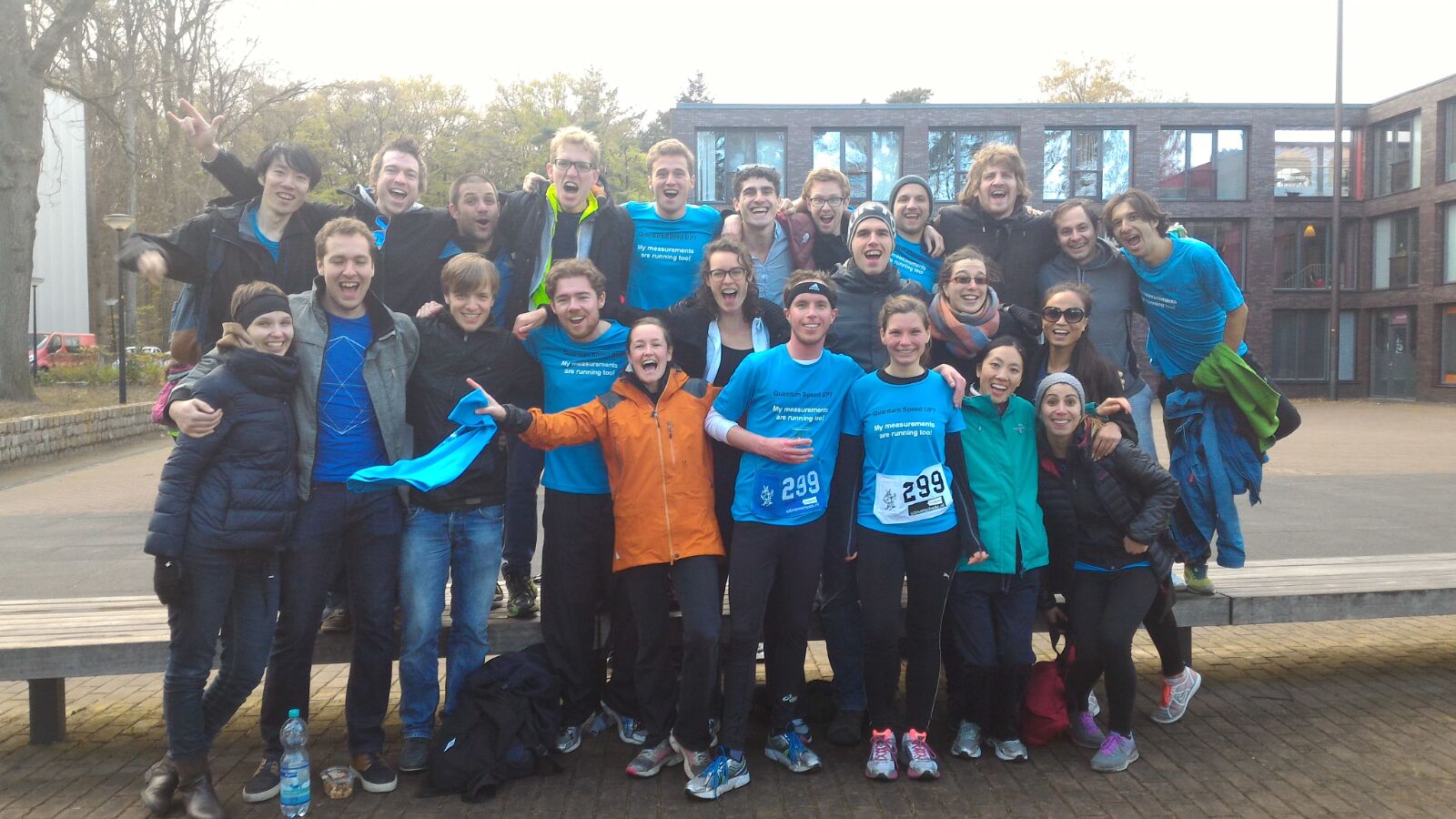 QuTech Batavierenrace 2016 team after the finish in Enschede.

Not only did QuTech become a multidisciplinary research institute, but it also has strong collaborations with industry partners, such as Microsoft, Intel, Fujitsu and others. The start of the collaboration between QuTech and Intel coincided with my start in Delft and the spin qubit effort led by Lieven is part of this collaboration. From the start, I was involved in the discussions and initial transfer of knowledge, through i.a. weekly virtual meetings (long before 2020 started) and visits from Intel engineers to Delft. One of the first topics to discuss was the design of a mask set to employ Intel’s fab to make industrial spin qubit devices. As part of this collaboration, I was even able to spend three months in Hillsboro, Oregon, in the summer of 2017 (read my earlier blog post). Sometimes there absolutely was a difference in mindset and approach between academia and industry, but over time this collaboration definitely paid off for both sides and I’m happy to have had the opportunity to be part of it. 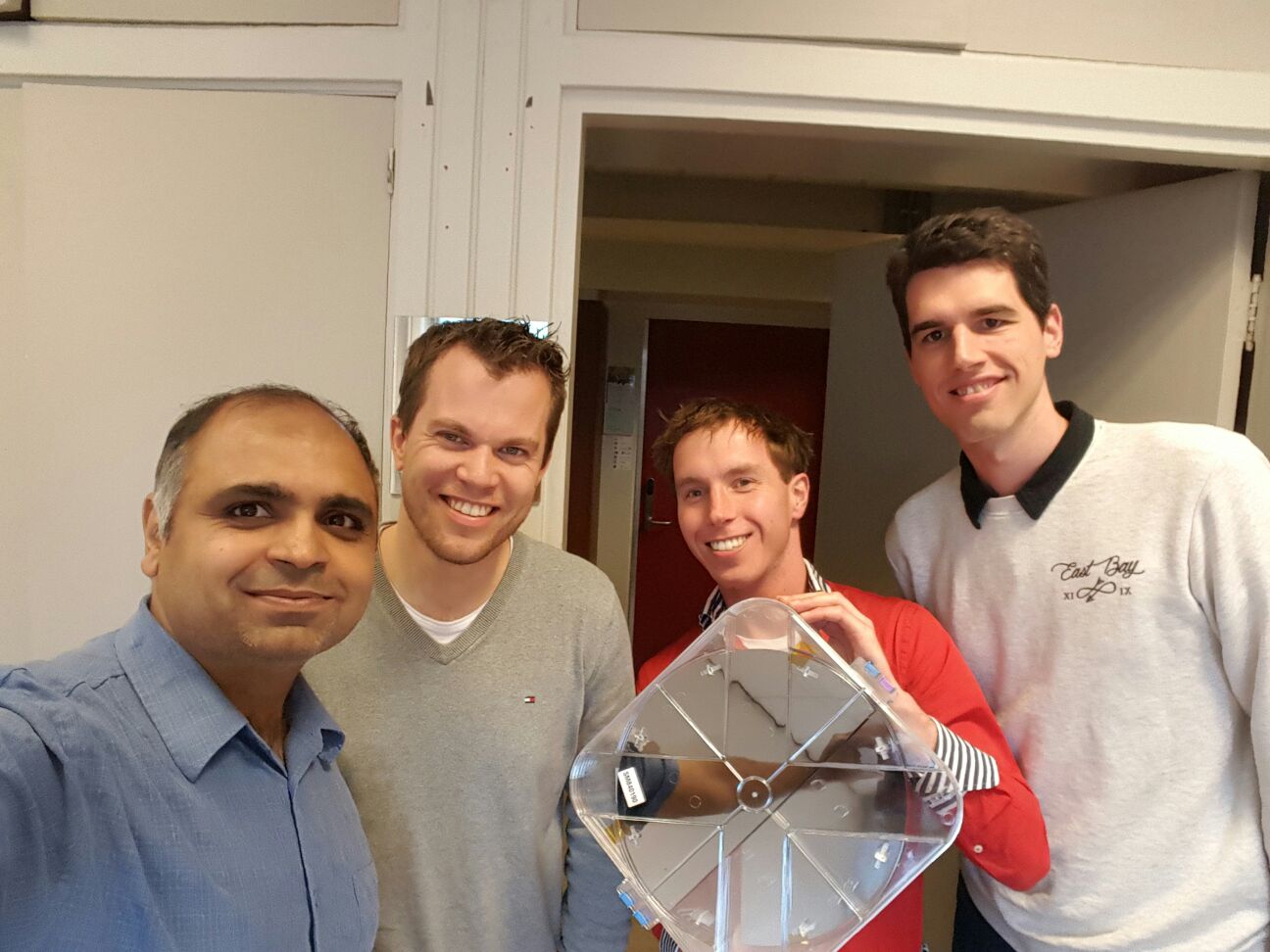 From left to right: Kanwal, Menno, Jelmer & Gabriel with the first 300-mm silicon-28 wafer from Intel that arrived in Delft.

For my PhD, I started a completely new project in Delft; spin qubits in silicon MOS (metal-oxide-semiconductor) quantum dots, and I was one of the last PhDs in Lieven’s group that got the full package: from working in the cleanroom to developing recipes to fabricate my own devices, all the way to doing the experiments on the devices. I’m glad that I have been able to do a bit of everything, but developing the fabrication schemes from scratch came with more challenges than we initially anticipated and took much longer than we hoped for. A large part of my time during the first two and a half years (apart from the intermezzo in the summer of 2017) have been spent in the Van Leeuwenhoek Laboratory (VLL) cleanroom in the Kavli Nanolab. We did make progress, but there has also been a lot of frustration. For a long time, I had been able to persevere, step over setbacks and give it another try, but at the end of 2017, my motivation was mostly gone. Just before I left for the US, I fabricated the first device that was good enough for real experiments conducted by Luca [1]. I was hopeful to start my own experiments when I got back, but unfortunately this device turned out to be a lucky shot and we did not systematically have working devices, and it did not allow us to continue with other experiments, so I had to go back to the cleanroom again. At the end of 2017, beginning of 2018 I definitely had my ‘PhD dip’, but some holidays and distraction, and shift of focus pulled me through eventually. My advice to those experiencing their PhD dip (and it is almost bound to happen) is to just accept it, relax and do things that you like and that give you energy, both at work and outside of work, and to not stubbornly keep on doing what drains your motivation. Later, I joined two colleagues, Tom and Xiao, on a device that was operational for a long time already to do the experiments for my first paper as first author [2].

For a long time, it felt like the distant future, but during the summer of 2019, I wrote most of my thesis [3] and quite suddenly the moment was there that Lieven approved my draft, including the propositions in September. This moment marks the start of the procedure of a plagiarism check, getting approval from the Graduate School, finding committee members etc. After receiving the final signature (except the one on my degree, of course) and processing the suggestions and remarks from the committee members, I received my printed theses as a nice present just before Christmas 2019: just a month to go. The last weeks before my defence, I mostly spent on reading my thesis and relevant literature. At the same time, I was convinced that after more than four years the last few weeks would not make the difference and, let’s be fair, the defence is mostly a formality, so I also made sure to take my time to relax and enjoy myself.

I have fond memories of the day of my defence and can only suggest to others to try to enjoy it to the fullest extent. The only nerves I felt, occurred to me at the start of my layman’s talk, but they quickly disappeared while talking, and that maybe is the most important reason for giving a layman’s talk. I enjoyed the actual defence, with the great support of my paranymphs Eva and Anne-Marije, being relaxed, taking my time to think of my answers and having an interesting conversation with my opponents. The rest of the day, with the graduation ceremony, drinks, dinner and party, was wonderful and it felt really great to see so many people being there to celebrate that day with me. 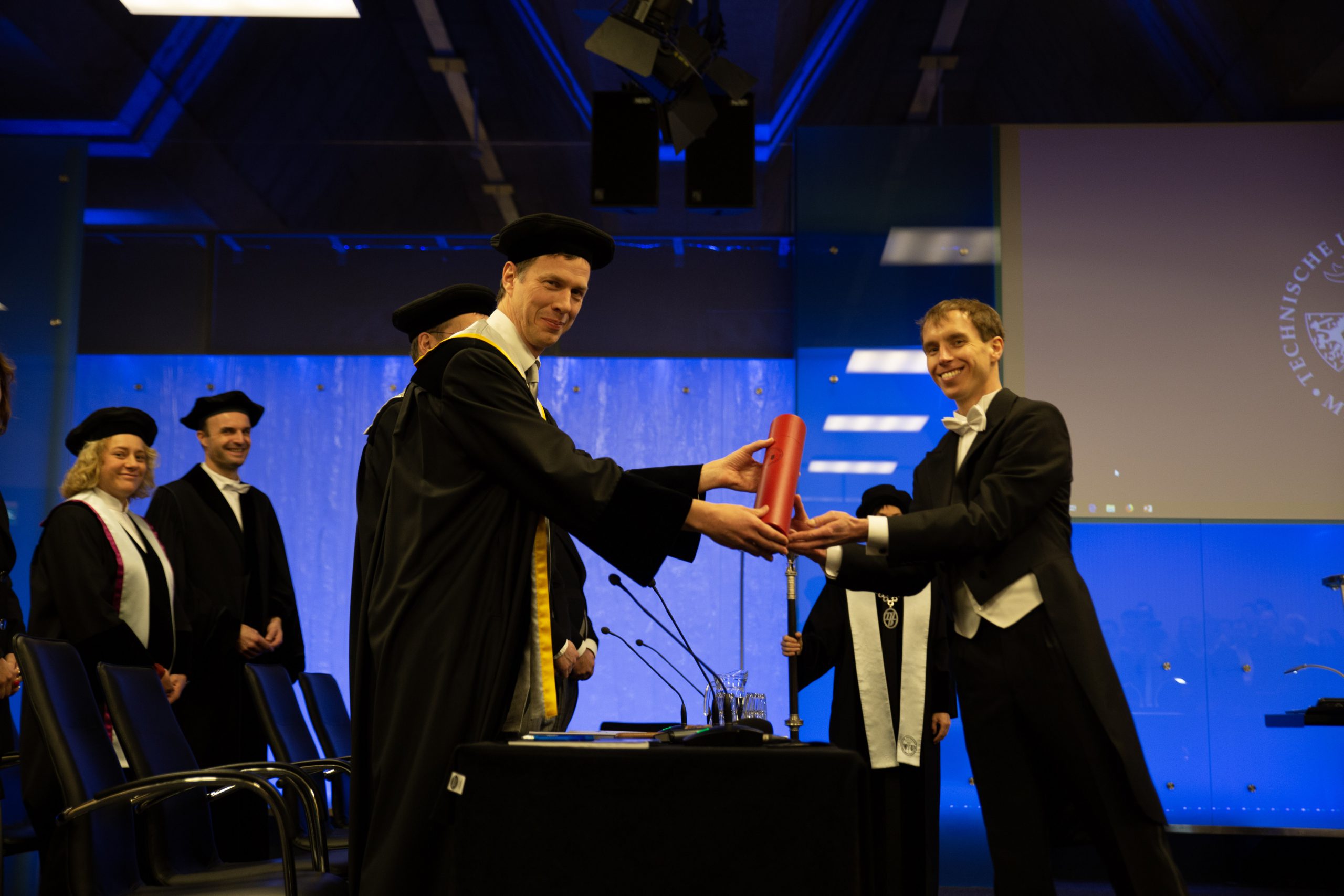 Receiving my degree from Lieven.

By the time the end of my PhD came closer, it once again was the time to decide on my future career and once again, the choice I had to make was a difficult one. Do I want to continue in academia, or is industry a better fit for me? Mostly following my gut feelings again, I started a new job exactly five years after the start of my PhD, on May 1st 2020, at ASML. Starting a new job in the midst of a pandemic is a challenge, but luckily ASML was quite well-prepared and before I started, they had the time to solve the unavoidable initial hiccups of fully working from home in the ‘intelligent lockdown’ in the Netherlands. The biggest challenge for me is that the omnipresent little questions you have in a new job are so much more easily asked while sitting next to each other in an office. Of course, I also miss the social interaction and it feels a bit weird that I still have not seen some of my colleagues I interact with on a daily basis yet, but I’m pretty happy with how it has gone over the last half year. Nevertheless, I’m looking forward to being able to go to the office at least a couple of days a week.

Academia and industry are of course different. The main difference so far is that in academia you are the one to determine what to work on and to set priorities, while in industry there are more deadlines and deliverables towards others. In industry the pace and speed with which things can change are different: what has priority today, can already be outdated tomorrow. The main similarity between the two is the relevance of finding the right person to ask your questions such that you can save precious time. Both have their pros and cons; I’m glad to have experienced academia and eager to find my way now in industry.

That was it, my time at QuTech has come to an end and has been wonderful; a big thanks to everyone I worked with. It always feels a bit sad to leave somewhere, but starting a new challenge is also great and I definitely will pay QuTech a visit once in a while. I hope you have enjoyed reading this blog post and maybe even pick up on something to use for yourself. 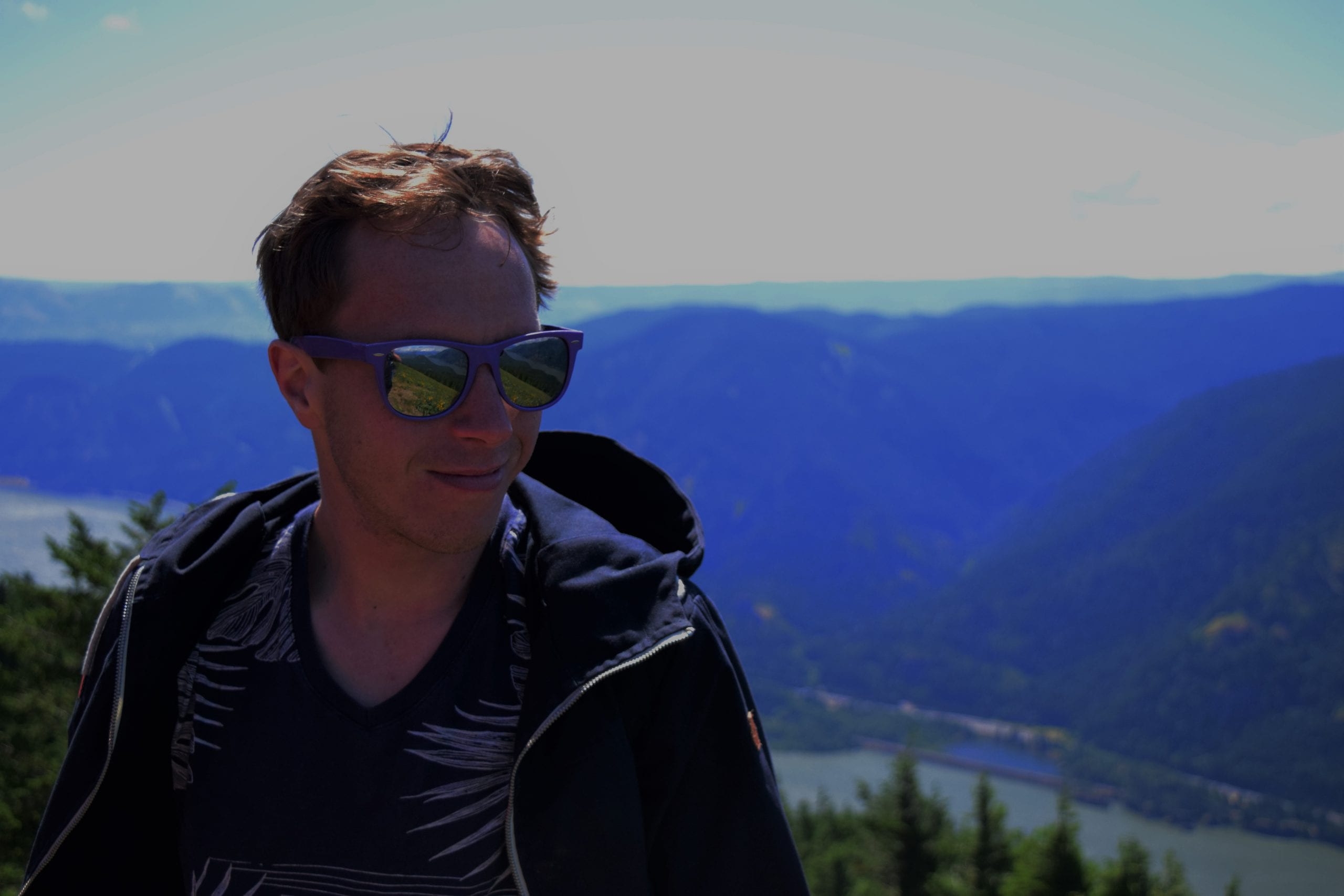 Jelmer Boter finished his PhD on spin qubits in silicon quantum dots in the Fault Tolerant Quantum Computing roadmap. He is now working at ASML.

Outside the university Jelmer spends his time reading, running and cycling and he is active in scouting.

‘Tis the time of Christmas again! Needless for us to say, this Christmas is an extra special one, just ...
Read more